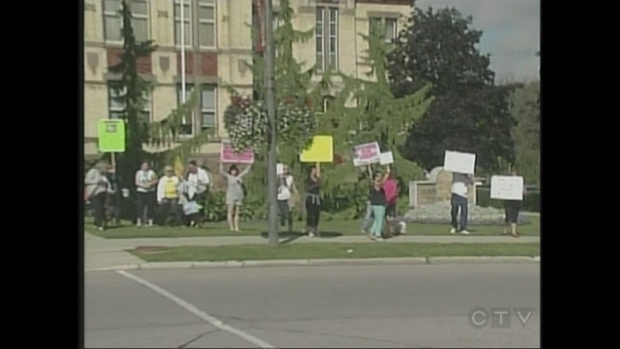 An Amish couple charged with animal cruelty on their Millbank-area farm have pleaded guilty to a number of charges as part of a plea deal that will see all other charges in the case dropped.

Menno Streicher pleaded guilty to operating without a license, but all other charges were dropped.

His wife Viola Streicher pleaded guilty to all charges against her. She faces $7,500 in fines and two years of probation during which she cannot own more than two dogs.

Their dog breeding will now also be subject to regular inspections.

The couple and their lawyer were greeted by two-legged and four-legged animal welfare activists outside the Perth County Courthouse in Stratford on Wednesday.

Protesters allege the dog-breeding operation is both dangerous and unclean.

Concerned dog owner Angela Cowan said: “My feeling is that the Streicher case is very typical of the situation in many Amish barns.”

Activists say 80% of dogs for sale on the popular Kijiji website were born and bred on Amish farms in southwestern Ontario.

The problem with that, they say, is that like the Streichers, most of these operations don’t run on electricity, which is in line with some of the strictest Amish beliefs.

The OSPCA will not specifically name Amish operations as a problem, but rather that it investigates thousands of animal cruelty complaints each year.

The Streichers obviously believe they are a good operation and take care of their dogs. Neither they nor their lawyer would speak on camera or release a statement.

This could be a case of precedent-setting, for the Streichers to vindicate their way of doing business, and for protesters to send a message that standards should change at all Amish dog-breeding facilities.

Cowan says “We wish they weren’t Amish, it has nothing to do with religion, it’s just basic human rights, dog rights and social responsibility.”