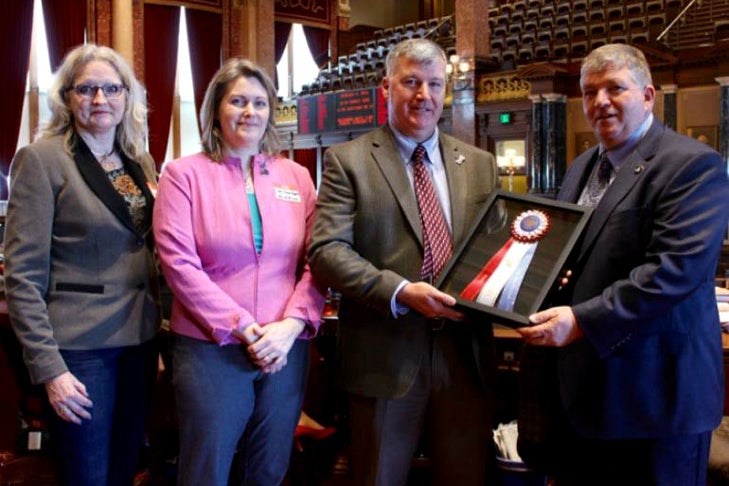 In recent years, legislation has been introduced in Iowa that would further expand some of the most restrictive dog breeding rules in the country. A dedicated group of breeders and club members from Iowa have come together and worked tirelessly to share the other side of the story – all the ways responsible breeders are making a positive difference in the lives of dogs, dog owners and the state as a whole.

On February 4, the group hosted a day at the State Capitol to share this message and allow lawmakers to understand how bills introduced yet again this year would negatively impact ranchers’ ability to breed and responsibly breed dogs, and also how responsible breeders benefit the state. In many ways.

As part of the event, the group presented the AKC Legislator of the Year awards to state senators Dennis Guth and Dan Zumbach, in recognition of their support of responsible dog breeders in Iowa.

“[We] were very proud to present the Legislator of the Year award to Iowa Senators Dennis Guth and Dan Zumbach…” said Cedar Rapids Kennel Association member David McDonald. “Both senators have been strong advocates for responsible dog breeders and owners in Iowa and demonstrate a dedication to legislation that enables the continued support of our purebred dogs.”

Events such as the one held in Des Moines are important for breeders, fanciers and exhibitors to develop relationships with lawmakers and ensure they don’t just hear from those who seek to restrict their rights.

“More than ever, it’s important to build personal and ongoing relationships with your state and local authorities, even if there’s no pending legislation,” McDonald said. “Take back the conversation to those who wish to restrict your rights to own, breed and exhibit dogs. Make them aware of the good service we provide to the dog-owning public by promoting responsible ownership and breeding, as well as our ongoing commitment to the humane treatment of the animals in our care.

The AKC Legislator of the Year Award (also known as the James S. Holt Memorial Award for Promoting Responsible Dog Ownership in Legislation) honors legislators who demonstrate a commitment to promoting responsible dog ownership, the welfare of dogs and the protection of the rights of responsible dog owners, exhibitors and breeders. It was established in 2009 in memory of the late James S. Holt, who served as an AKC delegate, board member, and federal legislative consultant.