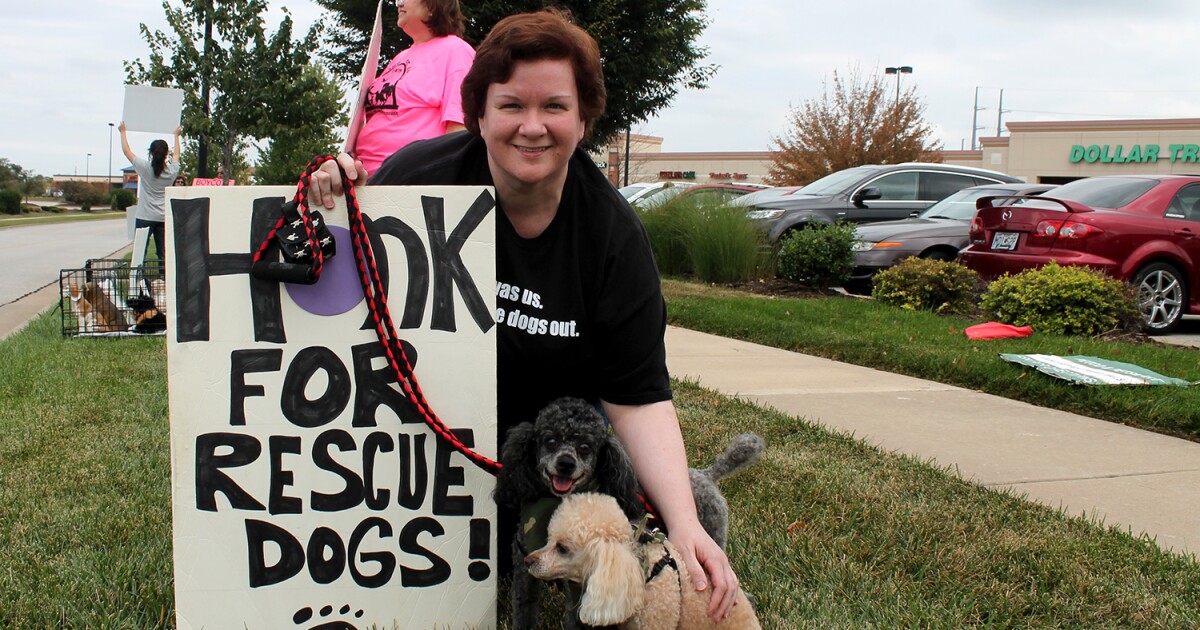 Updated Tuesday, September 29 with feedback from one of the store owners.

Animal rights activists continue to push to end what they call ‘puppy mills’ in Missouri, five years after voters passed a proposal tightening dog breeding regulations. A year later, Governor Nixon signed a compromise bill that reduced some of these regulations.

About 20 people picketed Petland in Lake St. Louis on Sunday, carrying signs that read “Honk for a shelter dog” and “Boycott stores that sell puppies.”

Leanne Fritsch of University City organized the protest for “Puppy Mill Awareness Day”. She said a small group meets at Petland every Saturday.

“It’s really about the parents in the factories who spend their whole lives in cages and bred and bred just to produce puppies to sell and when they can’t breed anymore, they’re destroyed,” Fritsch said. “They are never liked, they have no socialization.”

“You can’t do what we do without loving your animals. You just can’t do it,” said Grosenbacher, who breeds English bulldogs.

Fritsch said she had helped close six stores since 2008 by organizing protests.

She said she had no problem with PetCo or PetSmart because they had stopped selling puppies and harboring rescue adoptions instead.

“I personally would prefer no one to breed just because right now there are millions of healthy adoptable animals in our shelters that are killed every year. But if anyone is determined to go to a breeder, we say make sure you find a reputable breeder,” Fritsch said, adding that a reputable breeder would never sell puppies online or in a store.

According to the Missouri Department of Agriculture, the state has about 790 licensed commercial breeders; about a thousand less than in 2009.

Grosenbacher points to the stricter regulations outlined in Proposal B in 2010 as the cause, saying it has driven some breeders out of business.

“We estimate that we only have about 25% of adult females in kennels producing puppies today,” Grosenbacher said, adding annual inspections with the weight of criminal prosecution if regulations are not followed mean that their dogs are well cared for.

Penalties for violating state standards are “almost a thing of the past,” Grosenbacher said because his organization has a kennel assistance program where breeders help other breeders if someone gets sick or falls. in financial difficulty.

Jeff Hartmann, one of the owners of Petland St. Louis, said Monday that he regularly visits his breeders and collects the puppies he personally sells.

“If (the breeders) have a problem with the USDA inspection, we take them off our buy list,” Hartmann said, adding that he could make an exception if he knew the breeder was ill at the time of the inspection.

“For the rest of the world, they see a dog with mangled hair, but I know the breeder was sick,” Hartmann said. “People outside of our store try to portray our breeders as bad and that’s just not the case. They’re good people.”