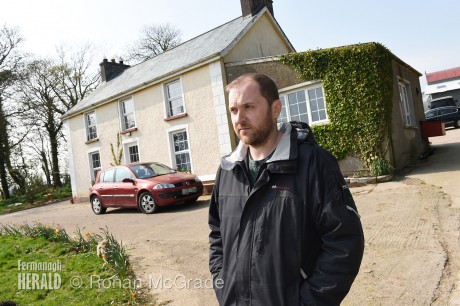 THE OWNER OF Clabby puppy breeding business targeted by a fire that killed 13 dogs last week has been told he will ‘burn in hell’ by angry animal rights activists.

The show featured the kennels, with conditions described as “appalling” and “barbaric”. Since ‘The Dog Factory’ aired, the family business has faced death threats, a bomb threat and suspected arson on Saturday night, which left 13 Yorkshires dead burrows; seven adults and six puppies.

Speaking to the Herald, David Hamilton refuted the claims made about the company in the documentary: “That is absolutely, completely inaccurate. People need to listen to the authorities about this. We’ve been called a puppy farm for days and weeks now. We operate a licensed dog breeding facility and the standards of our kennels are very high and I would say they are as high as anywhere in Northern Ireland and people just have to step back and say can- do you believe what you see on television?

“It doesn’t matter which kennel you go to in Northern Ireland, if you walk in at night and stick a camera around the dogs faces they’ll make a lot of noise, you play a pile of weird music, you can paint a picture and it’ll l image may not be accurate, you may get the wrong impression.

Police received a call on Friday saying two items had been left in the lane leading to the kennels and Clabby Road had been closed for some time. The devices were later found to be “nothing bad”, but Mr Hamilton explained that a sign accompanied the device in reference to the Real IRA.

“He would say something like ‘Sleep tight, we’re watching you. True IRA.

The following evening, a fire in a shed at the scene took the lives of a total of 13 animals. Police believe the incident, reported at 8:15 p.m., is related to the alert the day before. Mr Hamilton told the Herald the fire was started outside the shed before they grabbed the building, ’emptied’ the shed and burned the animals alive.

He thought it was deliberate and called on the perpetrators to leave him and his family alone.

“They say they know where I live and I need my throat cut and I’ve had people praying for a car accident and a lot of people saying I should burn in hell.”

Following the TV documentary’s advice, animal protection officers and dog control officers carried out an unannounced joint inspection of the kennels. The findings of the inspection will be presented to Council’s Environmental Services Committee on May 6, 2015.

At a committee meeting last week, chief executive Brendan Hegarty said when inspections had been done in the past, it was “absolutely perfect”.

Thousands of calls to close the farm on Facebook

IN RESPONSE to a TV documentary aired last week, featuring the Clabby dog ​​breeding company “Furnish Kennels”, there was an outpouring of opposition on social media.

The ‘Shut Down Furnish Kennels Fivemiletown Puppy Farm’ Facebook group has now amassed nearly 10,000 likes (9,914) while a petition calling for the kennels to be closed has over 11,000 signatures (11,415).

The Facebook founder, a woman from Fermanagh, has explained that she disagrees with the mass production of puppies.

“Dogs and cats are even pets. They are kept like battery hens, which to me is not correct.

She told the Herald that the page and petition had so far reached nearly a quarter of a million people and that there were plans to stage a peaceful protest outside Enniskillen Town Hall later in the week.

It is the group’s hope that they can change the law and prevent dog breeding on such a large scale.

As for the fire and death threats, she was quick to condemn the behavior.

David Hamilton, who runs Furnish Kennels with his brother Jonathan, said the comments on this site drew the attention of the police. “What I would say if I believed any of the things on it to be true, I would like that and sign the petition too. They are not true and that is what people need to remember.

“We have potential life threats, property threats, we have dead animals and they have to be very careful not to escalate this situation. We have due process, we have elected representatives, we have laws.

“None of these laws have been broken except by the people who started this fire, the people involved in the bomb threat. All crimes are not committed by us, but by others and these people have to be very careful about what they do.

Receive quality journalism wherever you are, on any device. Stay up to date from the comfort of your own home with a digital subscription.
Anytime | Anywhere | Everywhere